To be perfectly honest, less than six hours before the show went live, RevKess and KaliSara had no real idea of what they were going to talk about in this week’s episode. Not because they were lacking for topics or were being lazy. Launching the year on the show can be tiring.  They want to make sure that they kick things off with a bang. So, for lack of being decisive, they were going to a strictly “anything goes” musings show. That all changed when Geoffrey Stewart, the lynch pin for the Pagan Values Blogject, tagged RevKess in a comment to a post in the Pagan Values group on Facebook. Anne Hill, who visited the show on 6 May 2012 to discuss her ebook The Baby and the Bathwater, is an instructor at Cherry Hill Seminary. This winter semester she has been asked to do a non-credited condensed version of her Pagan Ethics masters level class.

Real World Pagan Ethics is the name of the four week class being offered through Cherry Hill. Available to all students of Cherry Hill, first time or master’s program, for only $95. The core reading is from Brendan Myers’ 2008 release The Other Side of Virtue along with articles from various Pagans around the world who have participated in the annual Pagan Values Blogject – including this article from Deborah Lipp.

What does it mean to be an ethical magical practitioner? How can you tell if a teacher or coven leader has good boundaries? When we step into leadership, how can we make sure we are doing right by our communities? This course is designed to help clarify our internal ethical code, and then apply it to the areas of Community, Service, Ritual, and Leadership. The poet and philosopher M.C. Richards wrote, “It takes a golden ear to be empty enough of itself to hear clearly.” We will approach the formation of healthy, rigorous ethics and boundaries in the spirit of deep listening and open conversation, and follow where it leads.

Along the way they talked about ethics, leadership, elder care and more.

After Anne signed off, RevKess mentioned Boudica Foster’s republished article Celebrity Pagans, talking about what are commonly referred to as BNPs (Big Named/Nosed Pagans) and SJ Tucker’s upcoming changes to her music catalog, dropping the use of the word “Gypsy” in at least four songs and her bio. The discussion in comments is really interesting to read. (As well as taking a listen to an episode of Sound & Spirit on WGBH.) 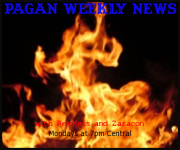 The 97th edition of PWN is all wrapped up for your listening pleasure. Zaracon was unavailable this week, but RevKess muddled through with news and talk about many issues. From Trayvon Martin to household incomes to government scandals to Target taking aim at Pagans. A little more music than usual was included.