The 90th edition of the Pagan Weekly News was full of emotional content. Zaracon and RevKess visited with Kyrja, author of the 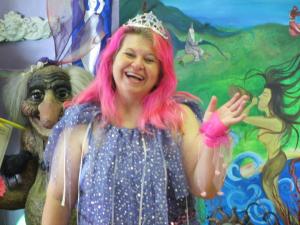 Rupert’s Tales series for children regarding the hate crime attacks on her and her community. As we discussed in a recent episode of the Pagan-Musings Podcast, Kyrja has been under attack from unknown assailants for several months. The attacks escalated from verbal abuse in December to shots being fired at her home in March and more recently chemical bombs being lobbed at her home on April 15, 2013. Her step daughter was harmed in that attack, chemical inhalation damaging her lungs. You can hear straight from Kyrja what is going on in this edition of PWN. (You can also hear KalisSara and RevKess’s interview with Kyrja earlier this month.)

Leading into Kyrja’s visit your hosts talked briefly about the new CD release by Didges Christ SuperDrum, Alien Technology. A selection from that CD was played during the program. They also talked about ConStellation IV, in which KaliSara and RevKess participated as Pangaia Metaphysical Store.

Right before Kyrja’s call, Zaracon and RevKess spoke up the recent developments with the Boston Marathon Bombing investigation. Both suspects have been apprehended, two brothers by the name of Tsarnaev from Chechnya. One brother was killed in a gun fight with law enforcement officials while the other was later taken into custody after receiving multiple gunshot wounds, he was later officially charged while in hospital.

Later in the show the hosts talked about the fertilizer plant explosion outside Waco, TX last week and information regarding the 30 Days of Advocacy Against With Hunts in South Africa, including part of a letter sent by SAPRA executives to the government regarding the exclusion of recognition of Pagan religions by the government.

Ending the show on a more positive note, there was talk of the 4th anniversary of Pangaia Metaphysical Store and Raymond Buckland’s recent foray into iPhone/iPad apps with his Romani Tarot application.

See below for a listing of topics and links that were discussed as well as a listing of the music played during this edition of PWN.

Z and Kess would like to thank all the live and archive listeners for tuning in and sharing in the information and news that they have for you each and every week on Pagan Weekly News and encourage you to visit their advertisers and supports. Tune in next week for another edition of the Pagan Weekly News with Zaracon and RevKess.