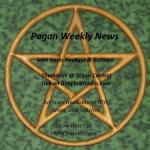 KaliSara and RevKess talked politics in this edition of the Pagan Weekly News. As the show went live the Republican debate was nearing its close. Both your hosts had been watching the debate up until show time and were prepared to talk about some of the same issues that were brought up on Fox Business Network’s sponsored debate. RevKess and KaliSara had also watched the State of the Union earlier in the week.

Listed here are some of the links to articles, issues, and topics that were discussed during this edition of PWN:

And here some of the stories the hosts ran out of time for: