RevKess and KaliSara were joined by singer, songwriter Mama Gina. Gina hails from Florida, his a wife and mother. After taking a break from her musical passions to raise her son and help support her family, she left her career as a paralegal to pursue her passion for music. And follow that passion she has. With the release of her third CD only weeks away she sat on her front porch to visit and share her music with the listeners of PMPChannel. 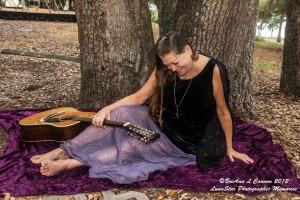 Gina last visited with RevKess in August 2013 on an episode of Musica Pagani. That was right around the release of The Undertaker’s Daughter, her second CD.  Since then she has officially said goodbye to her full time job with benefits and embraced her new career as a professional Pagan musician, full time. She’s toured the lower Eastern United States to perform her music for audiences of Pagans, new agers, and the like. This year, after the release of her third CD, Solitaire, she plans to tour into the Midwest, going as far West as Iowa and Missouri. She plans to go all the way to the West Coast by the end of 2016, sharing her music, her joy, and her laughter and tears along the way.

Mama Gina was kind enough to share some cuts from her upcoming CD release with RevKess in advance of the show. The three she sent were beautiful and he is looking forward to hearing the rest of the album. Gina’s sister and her son have both joined her in the recording studio to help lay down tracks. Jeremy Lembo from Didges Christ Super Drum also set down a couple of didgeridoo tracks for inclusion on the CD.

Gina has shared stage time with musicians like Ginger Das, SJ Tucker, and in her early years of rocking it out she even shared the stage with the legendary rock band Nazareth. When asked who she would like to share the stage with in the future she replied that the list is too long for an interview, but she would love to spend more time with Ginger Das and Sooj, Wendy Rule and that she’d be thrilled (and too nervous) to sing with Damh the Bard. And of course, to check something off her bucket list, Tuatha Dea asked her to join them on stage for a couple of songs during one of their concerts.

As soon as RevKess receives the full length CD from Mama Gina he will be doing a review of the music on his blog site, RevKess Reviews. You can read earlier music reviews of Mama Gina’s music there as well. Along with her website, you can find her music through ReverbNation and purchase her CDs through CDBaby. Digital downloads can be purchased through iTunes and Amazon.