Friday the 17th of May is the International Day Against Homo/Bi/Transphobia. Official referred to as the International Day Against Homophobia, it is a day to take whatever steps you feel necessary (within reason) to combat homo/bi/transphobia in your community. Even the United Nations Human Rights Office has stepped up and gotten involved by releasing a video.  This little video is only one thing that you can share to spread the word against h/b/t-phobia.

On Lavender Hill we do what we can to spread the word about intolerance, bigotry, persecution and violence against members of the LGBTQA+ community. Corwin and Phil are both openly out in the community and often take a stand on these issues, both on and off the air. It can be as simple as stepping up and defending someone against hateful words or as extreme as marching on the Capital steps to demonstrate in support of LGBTQ+ issues.

Around the globe their organizations that can help you get involved:

Around the blogosphere there are a number of articles covering IDAHO, here are just a few: 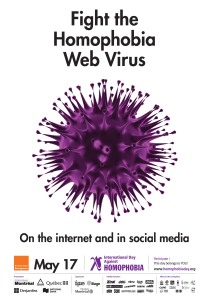 How are you going to step up and take a stand on Friday?